Our tour starts from the village Tomata of Kefalonia where the monastery that the coffin of Patriarch Gregory V is located. The holy martyr, according to the Orthodox Church, was hanged by the Turks on the day of Easter 1821 in Istanbul as retaliation for the uprising of the Greeks. The sacred relics of Patriarch found by Kefalonian ShipOwner Nicholas Sklavos, floating in the Bosphorus Sea who moved it to Odessa. The coffin was given to him as a blessing, he brought it back home and donated it to the church of Our Lady.

St. Andrew’s Monastery
Dates back to the Byzantine period, with sublime fresco and an ecclesiastic museum, where additionally the saint’s right leg is kept. The Monastery of Agios Andrea Milapidias is located in the village of Peratata in the south of the island of Kefalonia.
At Peratata you can visit not only the castle but also the monastery and the museum that it’s inside it.
The monastery was founded in 1579, renovated in 1639 and then suffered the devastation, including the famous earthquake of 1953, that brought to light many frescoes of the sixteenth century.
Today, the monastery is a convent of nuns, a museum that houses a unique collection of beautiful Byzantine icons and ecclesiastical objects and one of the most important pilgrimage destinations thanks to a very important relic preserved in it: the foot of the Apostle Andrew.
Inside the monastery, in 2002, a special building was dedicated to the museum, on two floors, where wood carvings, icons and even entire iconostasis are exposed.
In the first room there are the frescoes of the temple of Milapidia Monastery including images from the Passion of Christ, works of the monk Theodoros Poulakis, and images of the three hierarchs by the deacon Athanasios Anninos.
Among the exhibits there are also the shroud of Gregory V, Patriarch of Constantinople, the stole of Agios Nektarios and the shirt of Agios Panagis.
In the museum you will also see two Epistles of Agios Kosmas written in 1777 and the archepiscope bag of Kefalonia, embroidered by the nun Theodora Kanali between 1715 and 1721 with the image of Christ, on one side, and the Virgin Mary on the other.
At the monastery there are celebrations twice a year: on November 30 in memory of the Apostle Andrew and Friday of “diakeninismou” (the week following the Orthodox Easter) in memory of Zoodochou Pigi, the second patron of the monastery.

Next stop is the Church of the Annunciation which built at 1580. The church is situated within the walls of the Castle of St. George. It was also the Cathedral of the Medieval capital of Kefalonia, until it moved to Argostoli. Every year on the first Sunday after Easter the the image of Virgin Mary is transferred here from the Monastery of Sissia, which remains here until the Sunday of the Samaritan Woman.

St.Gerasimos Monastery
The Monastery of Agios Gerasimos is the largest and most famous of all Kefalonia.
It is situated in the south of the island near the villages of Valsamata and Fragata on Omala plateau, 400 meters above sea level.
To get there you pass first by a garden with 40 old wells.
This monastery is dedicated to the patron saint of Kefalonia: Agios Gerasimos whose remains are kept in the monastery in a silver casket which is periodically opened by the priest of the church to allow pilgrims to apply directly to the Holy prayers and to kiss the remains.
The remains of the saint are a place of pilgrimage not only for the inhabitants of the island but for all Greeks.
Agios Gerasimos founded this monastery in the middle of the sixteenth century, initially building a small cave where he slept and then was built above the cave monastery church.
Even today you can go to the cave that has two rooms and visit the chapel where it is kept above the body of the saint.
Chased the monastery grew but collapsed during the earthquake of 1953 and slowly rebuilt in the style of Byzantine and now has a small chapel and a new church very large and richly decorated.
Inside was made entirely in the imposing marble bishop’s throne and the surfaces of the ceiling and walls are decorated with paintings in the Byzantine style.
The church contains some ceiling murals depicting scenes from the Old Testament: Baptism and Birth of Christ, the Annunciation and the Rise of the Kingdom of Heaven, the Last Supper, the Crucifixion, Christ’s descent into hell and the miracle of Pentecost.
More important is the fresco of the death of St. Gerasimos depicted with Christ near the deathbed holding arm already in the soul of the deceased symbolized by a child in swaddling clothes.
Aghios Gerasimos died in 1579 and was canonized in 1622, was famous for its miraculous ability with those who suffered from mental illness.
Even now, those who suffer from disorders related to the mind turns to the Saint for help.
Two festivals are celebrated in the monastery: August 16th, the day that commemorates the death of Gerasimos and October 20, the date of transfer of the remains of the monastery.
On these occasions there is a procession during which the relics of the saint are carried under the shade of a plane tree that was planted by the saint.
We attend church authorities, policies, and Kefalonians thousands of tourists and the procession follows a big party with music, dancing, food and wine.

Very old Monastery built on a superb location surrounded by a forest of evergreen oaks near the village of Makryotika. Its name comes from “Thematos” the leader of Cephalonia (local Governor of the island) who had his base in the area. According to popular tradition, people that had various problems -“themata” – worrying them (illnesses, deaths, courtcases, prison terms, e.t.c.) were praying before the miraculous icon asking for guidance and solutions. During the last years the Monastery has been undergoing complete reconstruction.

The Holy Virgin’s icon is litanized ceremoniously on Tuesday after Easter (Virgin Portaitissa of Mt Athos), as well as on August 15th (Dormition of Theotokos) with tremendous participation of the faithful.

The monastery of Agrilion is located on the road linking Sami and the famous Antisami beach and it is dedicated to the Theotokos Iperaghia.
It was built in the eighteenth century on the site where, in 1722, was found the miraculous icon of Aghia Theotokos.
Continuing along the road, after the monastery, there are the ruins of the ancient Sami, another church and various nature trails to visit the area.

At a 250 meters high hill that during the ancient years it was named Kiatis the remnants of the ancient monastery of Saints Fanentes are found. There is no specific information concerning the year the monastery was founded but it is known that during the 17th century it was renovated using constructing material from the remnants of ancient Acropolis of Sami.
The three saints Theodoros, Grigorios and Leon were Christian sailors of the Roman naval fleet that in 188 B.C. had conquered the island. When emperor Constadios imposed to all the citizens to accept Aryanism, those three soldiers refused to return to their country and accept an heresy that was against their faith. So they stayed in Sami that was a nodal point for the ships of the Roman fleet.
According to tradition their remnants were discovered in a cave in the area in a miraculous way. The remnants were transferred to Venice during the Enetian Occupation and were found in 2009 and brought back to Greece after many years of efforts.
The earthquakes of 1953 completely destroyed the old building and the monastery was completely abandoned since then. Today next to the remnants of the monastery there is a small chapel in which there is an icon of Saints Fanentes. This icon is a copy of the original which is found in a temple in Sami.

The hill on which the remnants are found is the end of a walking trail that begins from Sami goes through the ancient Acropolis and ends up at the Agrilia Monastery. Through the green itineraries with the incomparable view, you can admire the beauty of nature and the ancient heritage of the area enjoying the peace and tranquility that the landscape has to offer.
A feast is carried out at the monastery on All Saints’ Day, day on which the memory of the three Saints is celebrated.

* Please note that you can adjust and manage you tour as you wish. You can add or remove destinations etc 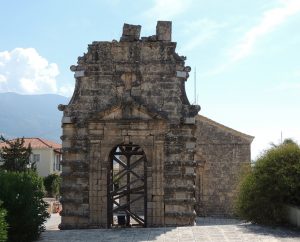